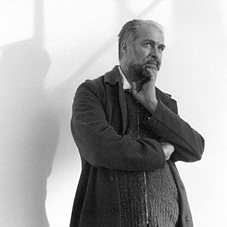 Should we see the early indications in his love for Twombly and Warhol, his meeting with Matisse and Blais? It is also true that Jean-François Bodin was born on December the 5th 1946 in the very heart of the City of Flowers in Paris…

Architect Jean-François Bodin is naturally and in all senses of the term a man of Art. Much more, he is an art lover, habitually to be found in art world, he is an enlightened collector.

His path under the sign of the letter M proves it.

M like this Marais quarter of Paris which he has never left and which probably pushes him to put the merging of tradition and modernity, history and discovery, memory and innovation that is the essence of his mark, into practice in his everyday life.

M as all those museums that have become not just landmarks but also an area to be explored, a land of adventure : the Matisse museum in Nice, the Modern Art Museum in Paris, the CAPC, the museum of Contemporary Art in Bordeaux (created together with Valode and Pistre and André Putman), the Granet museum in Aix-en-Provence, the Montmajour museum in Arles, the museography of the Contemporary and Modern Art Museum in Strasbourg (Adrien Fainsilber, chief architect), the museum of Fine Arts in Cambrai (with architect Thierry Germe)… which would not be complete without the contributions to the Emile Hugues Foundation in Vence and the Cartier foundation at Jouy-en-Josas.

Without forgetting the galleries that owe him their splendour such as Yvon Lambert, Leif Stahle, Laage Salomon, Claire Burus…and whose choice was anything but by chance.

And without forgetting also the great exhibitions in which he was architect and set creator : “Voltaire et l’Europe de la Monnaie de Paris”,“Puget” at the Charité in Marseilles, “Derain”,“De Van Gogh à Mondrian”, “Fautrier”, “Histoires de musées”, “Giacometti”, “L’’Expressionnisme Allemand” and much else at the Modern Art Museum in Paris…

M like Mode - Fashion, because this too, like art, is a question (also if in a different way) of managing new looks, new behaviours. And in this way, as in art, the landmarks of Jean-François Bodin, are always just as acute, rigorous and innovative.

M like Maison - house - because what probably characterises Jean-François Bodin best as an architect is his ability to listen, his taste for the other, his submission to a life project that involves, revamping, restoring and conversion as for the apartment of Olivier Massart in a prestigious architectural context, like the Cour de Rohan in Paris; the apartment/workshops of Christian Boltanski and Annette Messager in an old steelworks in Malakoff ; the private residence of Jean Bousquet in Parigi ; and then the Moorish villa of Jean-Charles Blais in Vence… or that involves architecture, design such as for the astounding and metalic Lazaro house in Baux de Breteuil, the transparent Sequela house in Bonifacio and the intimate and refined Konrad house in  Gordes…

Marais, museums, Mode, Maisons, the four “M”of Jean-François Bodin should not allow us to forget that the context of his works are not limited to these aspects. Witness to this is his work on the site of Toussus le Noble where he has created the buildings of a private airline company, from the architectural design to the design of the interiors, through the graphics and down to the creation of industrial prototypes, experience that gives a summary of all the disciplines practiced by Jean-François Bodin.

Ever a witness to this is the architectural and landscape programme carried out between 1985 and 1987, at the request of Didier Primat, in an property extending over seven hundred hectares, where the agricultural buildings were born, from the restructuring of hamlets, the reworking of an entire landscape, the creation of a park, ponds and the restoration of a castle.

In conclusion, the Intendant of Bordeaux is also witness to his works. Imagine a splendid and very cramped residence of the XVIII century on the narrow streets of Tourny that Jean-François Bodin wants to empty completely, arrange around a spiral in the form of a flight of stairs and transform  in accordance with everybody’s imagination into a wine library or a dovecote in which the rooms are decorated with the rarest of wines.

And finally, we would point out that after classical studies at high school, he started studying Political Science while following courses in Hindi at the school of oriental languages, before veering off impulsively to spend a year at the Ecole Spéciale d’Architecture then rounding it out with the Ecole Nationale Supérieure des Beaux Arts (UP6) where, six years later he obtained the DPLG diploma. And that at the same time he was following courses at the Ecole des architectes des Monuments Historiques at the Palais de Chaillot.

1975 - Establishment of his architectural practice in Paris

1978 - Creation with Andrée Putman of the “Ecart” interior architecture studio

1987 - Winner of the competition for the Matisse Museum in Nice

1994 - Member of the CNAP Board of Directors

1995 - Winner of the competition for the City of Architecture and Heritage , Palais de Chaillot ; formerly  the Museum of French Monuments in Paris

1996 - Winner of the competition for the National Modern Art Museum , the centre for industrial creation and the public information library at the Georges Pompidou Centre in Paris.

2002 - Administrator of the Architecture School at Paris Val de Seine.

2003 - Winner of the competition for the modernisation of the Jean-Jacques Henner Museum, Paris 17th.

2004 - Winner of the international architecture and town planning competition for the revamping of the Darsena in Milan, Italy.

2005 - Winner of the competition for the museographic route through the permanent collections in the Museum of Modern Art in the Ville de Paris..

2006 - Winner of the competition for the conception and building of the museum  of the comic strip in pavillion no. 2 of Chais-Magelis in Angoulème.