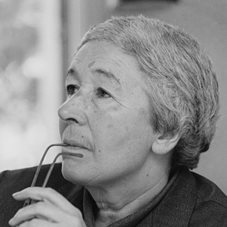 A strong imaginative and plenty of character have marked an indomitable career, amid construction sites and literary research depending on the unwavering focus on the context.

Gae Aulenti (1927 – 2012) began working in Italy during the aftermath of the war, when the contribution made by architecture was more than ever focused on the historical recovery of the past, and this is the reason why, aged more than 80, he stated that he still hated rubble. It became the distinguishing feature of his entire career as a designer and architect, the awareness that communication is achieved through form and that under no circumstances can historic tradition and the very potential of places be ignored. In his own words “the architect must be able to read the context because the roots are often hidden and underground. Knowing how to recognise them and reveal them is the great task of historically reinterpreting a place”.

It is a focus on context that led to the birth of cutting-edge solutions for working from home in the Nineties: the Totem multifunctional desk and storage unit and the unusual Tlinkit seat, projects devised with Tecno following the intensive partnership on the system of Kum storage units and meeting tables.He received a Lifetime Achievement Award in 2012 from the Milan Triennale, and his name is impressed across the globe through architectures that characterise the biggest international cities.