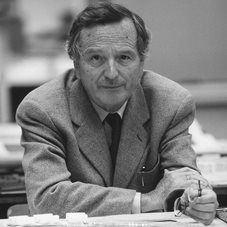 Architect and professor from Spain, Rafael Moneo began his cooperation with Tecno in 2003, with the project of the Hospital Materno-Infantil in Madrid, with tailor-made furniture pieces.

Rafael Moneo combines his professional activity as an architect with that as lecturer, critic and theoretician. His writings have been published in numerous professional magazines and the presentation of his work through lectures and exhibitions has taken him to institutions on both sides of the Atlantic. In 2005 his book Theoretical Anxiety and Design Strategies in the Work of Eight Contemporary Architects was published in English by MIT Press and in Spanish by ACTAR.

Rafael Moneo has been awarded numerous distinctions among them the Pritzker Prize for Architecture in 1996 and the Royal Gold Medal of the Royal Institute of British Architects in 2003.

Notable among Rafael Moneo’s works in Spain are:

2003 - The new Mothers and Children’s Hospital in Madrid

Outside of Spain notable works include:

1998 - Museums of Modern Art and Architecture in Stockholm

2000 - Audrey Jones Beck Building for the Museum of Fine Arts in Houston, Texas

Works currently under construction include the Extension to the Prado Museum in Madrid (inauguration in 2006), the Souks in Beirut and the Laboratory for Interface and Engineering for Harvard University.

A student center for Rhode Island School of Design and the Northwest Science Building for Columbia University are among his projects currently in the design phase.